Love Fifi: How To Make Money On Corsets 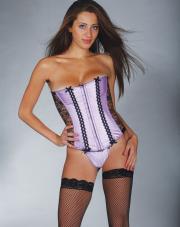 (Filed Under wholesale Lingerie News). According to Lia Farel, vice president of sales and marketing for Love Fifi, Ltd.—formally Empire Intimates—“there is a big demand for corsets and it seems to be growing everyday. Our key to success is to make sure that our garments are made well, work wonders and look spectacular.”

The Farel Corporation—which purchased Empire Intimates in 1983— has been manufacturing corsets in the United States for 50 years, and has seen major changes in how the garment is viewed by consumers over the years. “Corsets and heavy foundations used to be something primarily for older women whose aging bodies required additional support and smoothing,” Farel explained.

“The styling at best was plain [...] and often just ugly. Since Madonna first wore a bustier as clothing the early 1980’s, there has been a continuing interest in corsetry not only to wear under clothing, but also AS clothing. There is also a certain romanticism in corsetry. It is often sexy, yet ladylike, which adds to the appeal.”

In a new twist, Empire Intimates has entered into a partnership with LoveFifi.com, an online retailer specializing in corsets and figure-makeover garments, to form LoveFifi Ltd. Amanda Diaz of LoveFifi.com has designed the label’s line of corsets, which LoveFifi Ltd. debuted at this September’s International Lingerie Show (ILS). The line has begun shipping to stores, and the complete assortment will hit retailers by mid-November.

Farel commented: “We knew we were onto something with the forming of LoveFifi Ltd., but the early reactions on all levels were very validating. LoveFifi Ltd. is a foundation line in the truest sense, but with a big difference. We make body-sculpting garments in a wide variety of sizes, [select styles run in S through 7X], that not only reshape the figure dramatically, but are beautiful to behold. Many of our corsets double as outerwear and are often paired with formal skirting as wedding dresses.

“Just like Empire in the past, the new LoveFifi Ltd. is all about flattering and reshaping the body through the use of boning, compression and contouring. What’s happening on the inside of garment is even more important than what is happening on the outside.”

Farel sees corsets as faring well despite the poor economy.

Love Fifi Ltd’s feedback on corsets appears in the November 2009 issue of BODY. To see the full trend report, check out the electronic version of the November issue on our website now!

Love Fifi: How To Make Money On Corsets