Dreamgirl: How To Make Money On Corsets 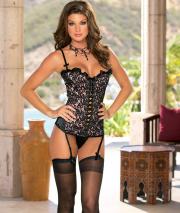 (Filed Under wholesale Lingerie News). According to Lar Hovsepian, marketing manager of Dreamgirl International, corsets and bustiers have amounted to approximately 10 percent of the company’s lingerie sales thus far in 2009; “and they continue to do well, as our designers launch innovative new fabrics and patterns for our signature fully reversible corsets. Over the last few years, our reversible corsets have been a true success in that we offer two corsets for the price of one, which also includes removable and adjustable shoulder and garter straps, a matching thong and stockings for an inexpensive price point.

“There is a growing demand for these corsets, as they wholesale for up to $24.95 and have great hanger appeal in the stores. The Dreamgirl design team is always looking for the latest runway inspirations to apply to the corset world, as it is one of those staple pieces that can go from bedroom play to outdoor wear!”

She said the company’s greatest recipe for success in the category is offering the customers increased value for their money. She also named the brand’s “beautiful satins, printed jacquards and spicy animal prints” as keys to their success, as well as the slimming nature of their corsets.

New in the line are “great new reversibles,” with black and red jacquard satin fabric and embossed lace pink and black fabrications, and a new cobra print update to animal print corsets. The company has also added a black colorway to its satin shantung corset dress, which includes boning at to the waist and front hook and eye closures, as well as front and back lace-up details.

She sees the weak economy as shifting consumer spending habits, which will consequently push corsets outside of the bedroom and into the outerwear market. “A lingerie piece that can be worn inside and outside the bedroom can be seen as more cost effective, so the styling may include more belts, thicker fabrics and better fit.”

When asked if the economy has affected Dreamgirl’s designing, Hovsepian responded: “In this economy, it’s no surprise to see that customers desire to spend less for each purchase. Because corsets are one of the higher-priced lingerie pieces, the demand for ‘best value,’ ‘better fit,’ and ‘appealing design’ becomes increasingly important. Our designers are answering the call by sourcing fabrics that fit well, have great visual appeal and can be found at relatively inexpensive prices that we can pass on in the form of savings to our customer. We still feature our corsets with matching thongs and stockings to make the customers truly feel like they are getting the best value for their dollar.”

Dreamgirl's feedback on corsets appears in the November 2009 issue of BODY. To see the full trend report, check out the electronic version of the November issue on our website now!