To receive more info from Shirley about a particular product, Click on the photo (photo will enlarge).

Shirley: How To Make Money On Corsets 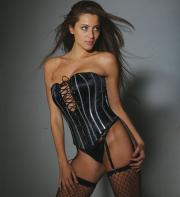 (Filed Under wholesale Lingerie News). Although corsets have become trendy in recent years, they have always been hot for Shirley of Hollywood, said Eric Schlobohm, director of International sales for the company. “Why corsets? It’s in our blood. We have always offered them in our collections. Herman ‘Grampsy’ Schlobohm, my grandfather and the founder of our parent company, the National Corset Supply House, started selling ‘notions’; underwires, boning, hook & eye, and elastics to the corset and bra trade in New York in the 1940’s, and incorporated here in LA [at Shirley of Hollywood] in 1948.” Shirley started sewing its own corsets in the 1960’s.

Schlobohm said that the wholesaler’s recipe for success has always consisted on “listening to our customers and giving them what they want, [as well as] quality, fit, and speedy deliveries in our glamorous Hollywood looks, all at a reasonable price. Corsets are so Hollywood!”

He described Shirley’s typical corset customer as ranging in age from her 20’s to 50’s due to the broad variety in styling, saying; “We have some edgier pieces with skulls and cross-bones as well as classic tapestry jacquards that anyone can wear.” In January, the company will introduce its 2010 collection, featuring “some outrageous new corsets and bustiers in Asian jacquards, reversible satins and more.” Intimate Attitudes by Shirley of Hollywood—the brand’s plus-size line—will release a new line immediately following the 2010 collection, and will feature a full range of corsets up to size 44, and best-selling styles up to a size 50.

He sees corsets as continuing to trend up, because “a good corset is so sexy, and can be worn from the boudoir to the ballet, or the bedroom to the local bar.

“Corsets and bustiers continue to be strong for us, even in this tough economy. We feel, and our customers tell us, that our corsets really are a bargain; especially when put them next to some of the European collections in the market place.”

Shirley of Hollywood's feedback on corsets appears in the November 2009 issue of BODY. To see the full trend report, check out the electronic version of the November issue on our website now!