To receive more info from Spanx about a particular product, Click on the photo (photo will enlarge). 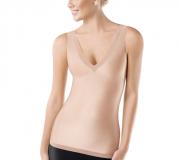 (Filed Under wholesale Shapewear News). Following the announcement last June that a men's line was in the works, Spanx has finally unveiled these styles. Included are three men's white cotton compression tops in V neck, crew and tank styles available in sizes S through XXL. Retail prices run from $55 through $58.

According to the company, the tops firm the chest, flatten the stomach, support the lower back, improve posture and are invisible under clothing.

In other news, the company has introduced the Simplicity line of body shapers, which includes a scoop neck, V-neck and lingerie strap camisole, which are designed to be worn as inner or outerwear. The company’s website calls these styles "pretty enough to be a part of your look!" In addition to basic shades of black, nude and white, the Scoop Neck Cami is available in multi-shades including camouflage and nude, black and pink, and Zebra print and black.

Also included in the seven piece line is a girl short, half slip and shaper. Styles retail for $44 to $59, and are available in sizes S through 3X.