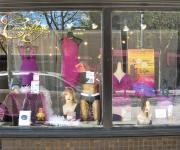 (Filed Under Fashion News). Camouflage rung in its 30th year in business this spring. Since it’s inception in 1980, the store has grown into a Santa Cruz, California staple, not only for its lingerie and adult novelty selection, but also for its promotion of safe, creative intimate exploration by people from all walks of life.

When founder Joan Levine opened Camouflage in 1980, her goal was to provide a women-friendly environment often lacking in adult stores. Over the years, her mission expanded to include people of all gender persuasions.

In 2006, Levine sold the store to Ken Vinson and Shannon Collins. Since that time, the duo have stuck to Levine’s original mission while deepening the retailer’s presence in the online market, re-doing its website and changing its tagline from “Experience the Fantasy” to “Positively Sexy.”

Levine is happy with the results. “When I was here at the Valentine’s Day party, I felt so at peace,” she said. “I’d been worried about the store, but it was so great, so beautiful, the window, the displays, the people—I thought, ‘wow I can be at peace because the store is fine.’”

Vinson spoke to Levine’s accomplishment in promoting safe yet open sensuality in the less open environment of 30 years ago. “Over the decades, there has been such a change in the openness and normalization around human sexuality, especially here in Northern California,” he remarked. “Stores like Camouflage have been around through all that—Joan and her staff had to fight those battles.”

Collins expressed her commitment to keeping the store as open as ever. “It’s always been a very sex positive store, I’m trying to make sure the community really knows that, and that we are open to all walks of life, not just heterosexual couples,” she said.

In addition to celebrating its 30 years, this year’s Good Times Readers Poll named Camouflage Best Adult Store and Best Lingerie store. Since the Good Times, a local Santa Cruz newspaper, started its Best of Awards 20 years ago, Camouflage has won several awards in the lingerie, costume and adult store categories.