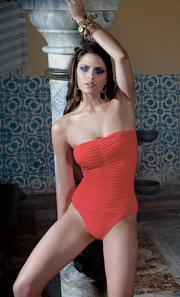 ISAM: Photo of Diva by Rachel Pappo featured on the ISAM website.

(Filed Under Wholesale Swimwear News). Barbara Brady, director of ISAM, expects increases in buyer traffic and exhibitors from last year at this summer’s ISAM, which is the swimwear portion of WWD MAGIC. The shows will take place in conjunction this August 17 through 19 in the Las Vegas Convention Center’s Central Hall.

Brady bases her expectations on current show registration combined with the optimism she has been hearing from the market. “I have been talking with friends of mine in the business, and they say swimwear is picking up,” she said. “The stores are selling swimwear and placing reorders.”

According to the ISAM website (ISamLa.com) as of June 9 120 brands had signed up to exhibit at this year’s event, including 12 brands who did not show at the 2009 installation. These include Calvin Klein; Amoeba; Dotti; Floatimini; The Mod Bod; Bathing Beauty; Beauty and the Beach; Koral; Masquenada; Perfect Tan Bikini; Faba; and Carol Wior.

As the only major swimshow in the western region, ISAM does not have any major competition, according to Brady. “Many buyers attend the East Coast show [Swimshow in Miami] in July, followed by ISAM in August for the West Coast. ISAM is for absolutely everyone. We attract the high-end, low-end, contemporary, junior, kids, post-mastectomy; you name it.”

She added that, as a part of WWD MAGIC, ISAM offers a one-stop shop for buyers. “We get crossover traffic from MAGIC, which is great because many times buyers who are shopping for apparel will stop by and add a few pieces of swim, which would not happen if it was merely a swim show,” she explained. “Buyers who shop for more than swimwear love the fact that they don’t have to run from building to building. They can stay in the central hall and pick up everything they need.”