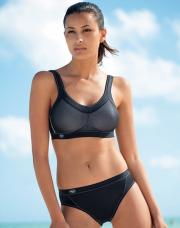 (Filed Under wholesale Activewear News). Runner’s World gave Anita a rave review in its November 2010 issue. The magazine featured the Anita Momentum 5529 sports bra in a story titled “Best For DD+,” for which it invited full-busted runners to test sports bras for this market.

According to the article, several testers were surprised by the amount of support Anita’s wire-free style offers, including one 32FF woman who wore it during a half-marathon. The $69 bra runs in sizes 32 to 46, B through H. U.S. retailers who carry it include Athleta, Intimacy and BareNecessities.com.