Century 21 Slated for Upper West Side 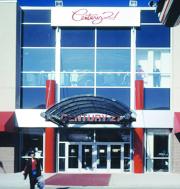 The entrance to Century 21 in Rego Park, Queens.

(Filed Under Fashion News). Come next spring, Upper Manhattan residents will no longer have to trek downtown for discount designer wares.

Century 21, a New York City-based department store chain known for selling high-end designer fashion at 40 to 65 percent off market prices, is planning to open its first department store on Manhattan’s Upper West Side at 1972 Broadway and 69TH Street, which currently houses a Barnes & Noble location.

According to the Lisa Aquilino, divisional merchandise manager of intimate apparel, accessories and activewear for Century 21, the store will open in spring 2011, marking the retailer’s seventh location.

At approximately 60,000-square-feet, this will be Century 21’s smallest store yet. To fit in with the more diminutive space while catering to the upper-income demographics of the Upper West Side, it will boast a more “boutiquey” atmosphere than the retailer’s current locations, with a focus on better brands.

“We’re picking and choosing our top designers for the new store, which will carry a more edited selection than our other locations,” said Aquilino. “This will be true for the intimate apparel department, where we will carry European designers, as well as top American vendors.”

Aquilino added that Century 21’s upper Manhattan fans have been asking for a location closer to home for many years. “We’re answering the call from customers who don’t want to travel all the way downtown,” she said.

Century 21 currently operates six stores, including one store in Manhattan at 22 Cortland Street near South Street Seaport. The retailer’s other locations are in Brooklyn; Queens; Long Island; and Morristown and Paramus, N.J.

Century 21 Slated for Upper West Side