To receive more info from Woodiees about a particular product, Click on the photo (photo will enlarge). 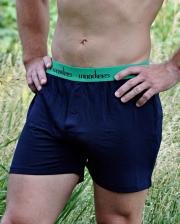 (Filed Under wholesale Men's Underwear News). Eco2wear, the company behind the Woodiees men's underwear brand, is ready to hit the national market.

Woodiees (woodiees.com) is actually a play on words rather than an indication of a risqué product; the line is made from Tencel, a fiber derived from Eucalyptus tree wood cellulose, which Lenzing, the company with the Tencel trademark, says is produced with minimal impact on the environment and with the responsible use of energy and water. Tencel is also known for its soft feel and moisture-wicking properties.

The Woodiees line currently consists of three styles; a brief, a boxer and a boxer brief in shades of black, white and charcoal. They are available in sizes S through XL for a retail range of $27.50 to $29.50. To complement the eco-friendly nature of the product, styles are packaged in brown cardboard rather than plastic.

Bruce Brodsho, president and owner of North Dakota-based Eco2Wear, who has experience in the unlikely combination of real estate, farming and retail, came up with the idea (and the name) while reading an article on Tencel. “I discovered that it was made from wood fibers and I thought ‘wow, that’s cool.’ That was my lightbulb moment. I thought about it for a while. At some point I decided to take the idea and run with it. I had the trademark for Woodiees before I finished the product,” he said.

Thinking about it for a while meant meticulously researching and developing the product over a two-year period, and launching it in specialty shops throughout North Dakota and Minnesota starting in 2009.

Eager to take his brand beyond the regional scope, a few months ago Brodsho connected with George Hardy, a marketing veteran, through online community IdeaCrossing.com. Hardy, who is now handling Woodiees’ marketing, got to work pitching buyers from department stores like Nordstrom, as well as Country Club stores and specialty boutiques.

Despite encountering some resistance to the Woodiees name, Hardy believes the product fills a void in the mainstream market. “There is no telling where this brand will go; I tell the buyers that men’s underwear is in the Stone Age,” he said. “Believe it or not, women buy 75 percent of men’s underwear, and so many lingerie store’s carry product for men.

“I can really see women buying this for their boyfriends or husbands. [It is perfect] for anyone from the college student to the middle-aged guy who plays golf, as long as he wants something different, fun and comfortable to wear. We are looking to bring on reps. all over with knowledge of the business to get this product in new markets.”

Brodsho added that he has gotten positive feedback from independent retailers and consumers. “[The underwear] is a natural fit, designed in such a way that it is comfortable with good moisture management, no chafing and no discomfort. So it is not uncommon for people to tell me that they forget they even have it on,” he said.

“We had heard great things about them so we knew they would be a great sell,” she said about the brand. “We couldn’t find that many eco-friendly men’s products, and we wanted to have something along those lines. Woodiees gets talked about; it gives us something different and it has been a good gift item for women to buy for their husbands; but it’s a gifty item while still being practical. Oftentimes, we’ll sell a woman a pair and she’ll come and say ‘he wants three more pairs.’ ”