To receive more info from Aerin Rose about a particular product, Click on the photo (photo will enlarge). 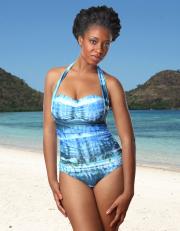 The Kailee style by Aerin Rose; part of the brand’s current line.

(Filed Under Wholesale Swimwear News). Aerin Rose is bringing its bra-sized swimwear to a younger customer.

The New York City-based brand; designed by president Aerin Kwait-Taubin, will introduce a new division of contemporary, bikini-driven swimwear at next July’s Miami SwimShow, which will ship to stores that October and November. Bra-sized bikini tops will run from 32 to 38, B/C through F/G, while bottoms will run from XS to L. Although the team at Aerin Rose is currently referring to the line as ‘Signature,’ they have yet to finalize a name.

According to Jay Schwartz, sales manager of Jordan Taylor Inc., the parent company of Aerin Rose, the new line extends the brand’s reach to a younger, full-busted woman; a customer who he says is largely ignored in the swimwear market. Although Aerin Rose currently produces select bikinis, the company’s niche is tankinis and one-pieces based on the demands of its customer, which Schwartz described as of young middle age.

“We’ve been in business for 10 years now, and we want to target the younger, hipper, fuller-busted customer with the new line,” he said. “It will not be junior, it will be for the professional in her 20’s. The emphasis will be on bust construction and fit, which Aerin specializes in, and contemporary design.”

The line will encompass approximately seven prints as well as some solids in five tops and bottoms. Schwartz described price points as just “just a touch higher than our current line;” while an Aerin Rose tankini retails for an average of $120, a bikini in the new line will be priced at approximately $140.

This product expansion is the result of a particularly successful year. Aerin Rose hired Schwartz as its first sales manager in July, he said, after experiencing a 40 percent sales’ increase over the past year. Previously, Kwait-Taubin handled sales herself.

Since July, Schwartz estimates that sales have already jumped 220 percent year to date, and he expects them to be even higher than last year. “We’ve particularly seen a growth in our plus-size business, and we were recently picked up by Roamans.com. We will go live on that site in a few weeks,” he said. “E-commerce is a big business for us. Specialty lingerie stores like Intimacy and Bra Smyth, as well as BareNecessities.com, also carry us.”