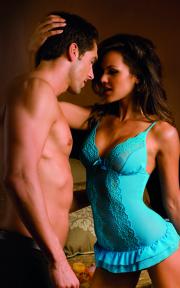 CJ (on right in blue) on the cover of Dreamgirl’s spring 2011 lingerie catalog.

(Filed Under wholesale Lingerie News). Dreamgirl is bringing Cielo Jean (CJ), the company’s new contract model that appears on its costume and spring 2011 lingerie catalog covers, to next week’s ILS.

Stop by booth 329 on Monday 3/28 and Tuesday 3/29 from 9am to 5pm for a look at CJ, who will be modeling, posing for photos and signing her catalog covers. CJ began modeling for Dreamgirl last August, and has been on the cover of every catalog since that time.

“We are very excited to have CJ as our new face,” said Alicia, the U.S. director of marketing for Dreamgirl. “She is a lovely young woman and a great representative for Dreamgirl. Her beauty is apparent inside and out. She has a healthy, sexy and modern essence.”

CJ is also featured in the music video “Grenade” by Bruno Mars, and played the ‘sexy muse’ in Trey Songz “Can’t be Friends” video shot in 2010. Her modeling experience includes a seven-page spread in Maxim in Spanish, American Curves, Muscle Magazine and FHM, whose readers voted the Florida native “Hometown Hottie” two years in a row. She has also been featured in Bowflex national advertising campaigns.