To receive more info from BodyZone about a particular product, Click on the photo (photo will enlarge). 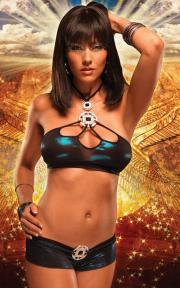 A RA style by BodyZone.

(Filed Under wholesale Dancewear News). Dancewear and clubwear maker BodyZone Apparel has entered into an agreement with Jolar Speck to carry its entire line.

Overall, Grden called this spring’s ILS "the most successful in a number of ways." The company reported a 20 percent increase in new customer orders and the single largest order it has ever procured.

"The embracing of the new RA line [of boxed dancewear] was beyond expectation and the stories of overwhelming sell-through from esteemed vendors were many," said Grden. "It looks like a fantastic year ahead for BodyZone Apparel."

BodyZone is a wholesale dancewear and clubwear producer based in Phoenix, Ariz.