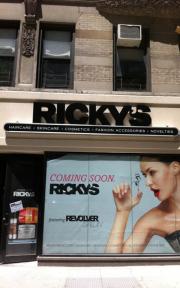 A Ricky’s NYC will open at 2385 Broadway on the the corner of 87th Street in New York City. The location boasts 3,000 square feet and will include a Revolver Salon. Another Ricky’s store will be opening on First and Seventh Avenue, according to Todd Kenig, chief executive officer of Ricky’s.

"This year, we plan to work smarter, not harder. We want our businesses to be more profitable." Kenig told BODY. "We will also be opening stores in malls this year in Queens, Brooklyn and Florida. This is a new direction for us. We are focused on the year-round business. When we open a temporary store, it is to test the neighborhood for a full-time operation. We will be opening another 20 to 30 temporary stores around the country this year."

To attract a wider customer base, Ricky’s has struck several promotional deals with popular television shows and celebrities. While Kenig said that not all the details could yet be disclosed, he gave an example of a new product, the result of an exclusive licensing deal with Svedka brand vodka: the walk of shame kit. The kit, which retails for $25, includes morning-after essentials like a tote bag, flip-flops, lip balm, a pop-up hairbrush, folding sunglasses, deodorant, cleansing wipes, peppermint drops, hair elastics, dry shampoo and hangover-inspired Svedka cocktail recipes.

Another way Ricky’s is planning on reaching consumers is through the store window displays. There is a possibility that several displays will be themed around popular television shows, including one for the Oxygen network’s program "Hair Battle Spectacular."