To receive more info from Iconix about a particular product, Click on the photo (photo will enlarge). 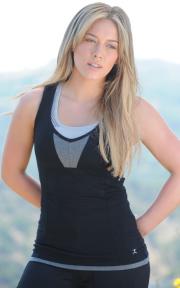 Hilary Duff in activewear by Danskin.

The Move for Change campaign was formed to encourage women to be active in order to live a healthy, happy life. To promote the initiative, the Danskin brand is launching a new website, DanskinMove.com, which features photos and videos of Duff, Lakshmi, McCarthy and Brinkley donning Danskin activewear to complete their favorite workout routines. The website features interviews with the celebrities, fitness tips and inspiration as well as a link to Danskin’s online shop.

Additionally, Danskin is supporting each actress’ charity of choice as part of Move for Change. DanskinMove.com outlines information about the four charities, which provide support, funds and research for women and children’s health and well-being. "Danskin is generously donating to each individual’s charity," Brinkley stated. "I think that is so motivational — to show people that you not only have to stay fit, but you also have to give back, and all of those things make you feel great."

"These amazing women are so inspiring, and we know our consumers will embrace their inspirational tips on fitness, lifestyle and wellness," stated Dari Marder, chief marketing officer of Iconix Brand Group. "As a brand exclusively for and about women, we know a connection point is through philanthropy. We are proud to support Hilary, Padma, Jenny and Christie’s charities as a natural component of this campaign."

Danskin was founded in 1882 in New York City and produces activewear for sports, dance, yoga, gymnastics and cheerleading as well as casual loungewear for girls and women. Iconic Brand Group acquired Danskin in 2007.