To receive more info from Underwear Station about a particular product, Click on the photo (photo will enlarge). 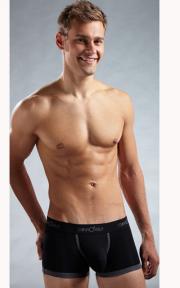 A style by Obviously for Men.

(Filed Under wholesale Men's Underwear News). Underwear Station, Inc. announced it will take over the distribution of the Obviously for Men underwear brand in North America and Europe starting in 2012.

The Brisbane, Australia-based Obviously for Men brand was established in March 2007 by designers who sought to create a more comfortable, anatomically designed underwear range. Obviously for Men products are available through retailers in Australia, the U.S., the U.K., Canada, Japan and Russia.

Alice Paparatto, the director of merchandising for Freshpair.com, said: "The Obviously brand resonates with the Freshpair consumer, and we have enjoyed exponential growth in sales in the past year. We are very excited about the move to Underwear Station, who is a great business partner, and we look forward to continued growth with the brand."

Underwear Station is a men’s underwear distributor, designer and licensee with a portfolio of brands including Spanx, Joe Snyder and Good Devil. The company is based in Miramar, Fla.