To receive more info from Victorias Secret about a particular product, Click on the photo (photo will enlarge). 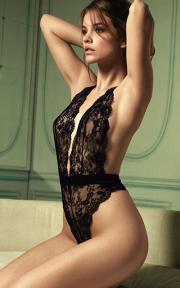 A look from The Victoria’s Secret Designer Collection.

The looks launched on the company’s website on Tuesday, Jan. 24 with the tagline, "It’s lingerie only Victoria’s Secret could create." Inaugural looks from the collection include unlined, padded and push-up style demi and balconet bras; V-strings, thongs and bikinis featuring ruffles and sheer lace; garter belts; babydolls; teddies; and corsets. Pieces retail from $38 to $298.

The Victoria’s Secret Designer Collection is currently only available online and in five select locations, including New York City flagships in Herald Square and on Lexington Avenue. The company said it will expand the collection to seven additional stores this summer.

please do you do wholesale, cos i want to be a distributor.tell me all it will take.