To receive more info from The Floodline about a particular product, Click on the photo (photo will enlarge).

Added: Mar 2012
A two-piece style by The Floodline.

Added: Oct 2011
A two-piece style by The Floodline.

Added: Oct 2011
A two-piece style by The Floodline.

Floodline Emphasizes Versatility in its Styles 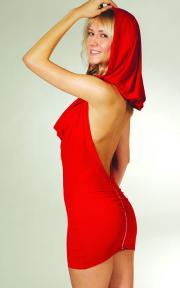 (Filed Under wholesale Clubwear News). The Floodline, a manufacturer of clubwear, lingerie, dancewear and costumes, emphasized to BODY the versatility of its products which allows it to be sold in a wide variety of retail stores.

A perfect example is a hooded, very low-backed dress with a line of rhinestones between the cheeks. This best-seller is pleated in such a way that gently gathers the garment around the buttocks. It works in both conventional dress shops as well as in sexy lingerie shops, according to owner Ute Schwemmer. She added that the dress has also had a strong response from costume retailers because “it works well for Halloween for the woman who wants to dress up but does not want to wear a silly costume.” The same retailers can sell it into the Christmas season because “it makes a great holiday dress,” she continued.

Schwemmer emphasized that quality and workmanship are very important to her, noting as an example that the signature rhinestone trims she incorporates in many of her designs are the superior Czech rhinestones “which are far better in the bling department than what the Chinese are using.”

For next season the company has expanded the Floodline offering of long, two-piece skirt sets to 15 styles. They are available in lace, sequins, soft jersey, lycra and metallic lycra with many color options and start from $25 to $36. Matching thongs are available. Schwemmer said her designs and colors change weekly to provide customers with lots of variety and choices.