To receive more info from bristols 6 about a particular product, Click on the photo (photo will enlarge). 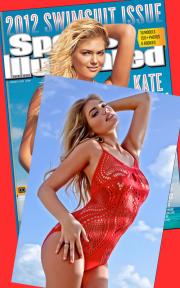 (Filed Under Wholesale Swimwear News). Bristols 6, the maker of the Nippies line of nipple covers, has found success in expanding into intimates, elaborate nipple covers with tassels and now swimwear. Indeed, the tiny swim collection, which is in its first season, found its way into the just-publshed 2012 Sports Illustrated swimsuit edition: a goal that some swim companies strive to achieve for years.

Model Kate Upton can be seen in the magazine wearing a red, one piece Nippies suit, which looks very much like a crocheted garment. Bristols 6 co-owner Christine Benidt explained, however, that the suit is actually a seamless garment “made in Italy of nylon spandex” which means that it will hold its shape and “will not get baggy when wet. You really can wear them in water,” she emphasized. “Get wet, swim in it!” She added that her suit is much flatter than a similar crocheted suit, and is also “ a great lingerie piece to wear as club wear under a blouse or under a jacket.”

One of the ideas behind the company getting into sheer intimates and revealing swimwear was to provide a natural outlet for its nipple covers. Indeed, the company sells kits that include a package of nipple covers with the garments. The one-piece version that was in SI wholesales for $38 and has a suggested retail price of $92. A similar two piece version is $42 wholesale with a suggested retail of $98. A package of nipple covers comes attached to the hang tag.

The Nippies swimwear is sold in such retail stores as Diane’s Swimwear in California, as well as other swim and lingerie specialty stores.