To receive more info from Coquette about a particular product, Click on the photo (photo will enlarge).

Coquette Expands Plus, Corsets and Costumes 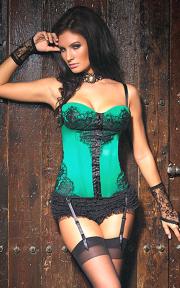 (Filed Under wholesale Lingerie News). A “25% increase” in the overall number of apparel styles offered by Coquette, as well as a new catalog collection, were among the latest developments reported by vp Marcus Horea in a recent interview.

In addition to increasing the corset and lingerie offerings across the board for 2012, Horea said “for next year we are working on a large plus size line, a specific grouping for plus size. Demand for plus has been increasing incredibly. Some of our plus size styles outsell our smalls and mediums.”

The new plus collection will contain about a dozen styles and will comprise three distinct groupings delineated by “certain fabrics and colors for each group.” Plus will continue to be shown in the regular catalogs, however, not in a separate volume.

As part of the expansion of its regular-sized lingerie lines, the new “Spring Summer” catalog, which is the first such seasonal catalog the company has produced “in a long time,” according to Horea, will contain about 15 new styles, many in pastel colors, and is due to appear in September. “Product will be available in February 2013.”

Coquette also recently expanded its “novelty line” and has grouped about 20 items under the brand name Nutz. These includes such things as aprons, boy shorts and lingerie all with “funny sayings” on them. While the company always had some novelty items like this for both men and women, they are now all grouped under a single label. The Nutz collection is currently displayed in a catalog along with the company’s Kissable boxed lingerie. That collection, which was introduced in the second half of last year, now contains 60 styles, and will be been expanded to contain 80 by fall and 100 by next year.

Last year Coquette changed its logo and Horea said he is now changing the look of the photos and catalogs to a “more mainstream look. We are getting away from a cheesy ….” He stopped and re-phrased. “We are cleaning up the entire catalog to give it a higher end look.”

Coquette once had what seem like a thriving men’s line under the Zakk label. When BODY asked about that collection last year Horea said the category had been scaled back and that the company was pondering its future. Now the vp admitted that not much has changed. “We are hoping to find a designer, almost to give it new life. The line has not had love in terms of design or inspiration,” he continued, adding that this is the reason “we have not done much with the line.” In answer to a follow-up question about the collection, Horea said in an email, “The men’s line has been in a “status quo” for about 4 years now, only offering our best-selling styles. I do plan on expanding the line out but it has been put [on] the the shelf and will not be revisited until planning begins for 2014.”

On the marketing side, Horea said the company has recorded video clips of several seconds in length for “aLL lingerie style offerings from the main 2012 catalog as well as the current holiday catalog,” that are designed to give customers a more complete look of each garment. The videos are “creating a nicer, higher end image for Coquette.” This and other upgrades have meant the company is “spending more on photo shoots.” In a follow-up email he added, “These video clips can be found on our website under “downloads.” They are also available upon request on our usb flash drives. They are primarily used for websites to help promote the styles.”

Current pricing for Coquette falls generally into three tiers. Tier one, which may come on a padded hanger, wholesales in the $22 to $45 range. “We are doing a lot more tier one product,” said Horea. Tier 2 wholesales in the $12 to $20 range. And Tier 3, which is the Kissable boxed collection, wholesales for “$10 across the board.”

Last year the company deepened its commitment its Darque line by launching a new catalog for the merchandise. Coquette has now published its third Darque catalog, this one 80 pages, which includes 18 new styles. Within the collection, the company has added two new fabrics including pleather (“we never used pleather before”) and a matte finish wet look fabric. “Our Darque line has grown quite a bit in sales. We did $2 million in the past 12 month,” on Darque alone Horea claimed, “I would say it will increase 10% to 15%” going forward. “It is one of our strongest lines.” For the latest catalog, he noted, the company “hired a mainstream model instead of a fetish model” to change the look of the catalog. He explained, however, that the “look and feel” of the fashions has remained similar to previous themes. In a follow-up email he added, “The Darque line offers more edgier, provocative and fetish designs. The purpose of this line is to attract a younger demographic.”

Asked about the increase in the number of company’s in this market specifically targeting rave wear, Horea said, “Darque is probably the line that is closest to rave wear,” adding, “there is a big movement, rave beats, dj tech. In Europe it is huge. We have actually been talking about that.” But in answer to a follow-up question, Horea emailed, “Rave wear is something we are not planning to pursue at this time. I agree there is a larger movement of demand for these wears but I also recognize that we are very focused on our corset line.”

The company has also expanded its commitment in the costume area, hiring additional designers and, in November, joining the Paper First Affiliates. Horea also noted that it has lowered the prices of its costumes from a wholesale range of $22 to $35 to a range of $16 to $26.

And Coquette looks to keep on expanding. “We plan on increasing the line for 2013. We currently have around 140 style offerings which would likely increase to 150 plus for next year,” concluded Horea.