To receive more info from Sensualle about a particular product, Click on the photo (photo will enlarge). 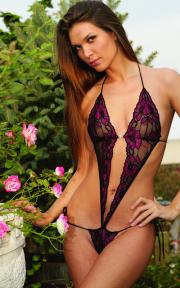 (Filed Under wholesale Lingerie News). After exhibiting at both the Curve and International Lingerie Shows in recent years, Sensualle has launched a new U.S. advertising campaign and is poised to announce its first U.S. independent sales respresentative. Taken together it is clear that the company is serious about the American market and deserves a closer look.

If there is a central theme to the Sensualle collection of provocative lingerie and dancewear, it is that many pieces reveal more than they cover -- but often in a unique and interesting way. There are lots of strings, straps and see-though or cut out fabrics. The thongs, tangas and g-strings, which might well be the highlight of the collection, often merely adorn the flower rather than cover it, just as a mere ribbon might contain a bouquet. But they so decorate in unfamiliar and compelling ways.

The Tanga Tranca is fronted with a butterfly of lace suspended in a triangle of jeweled chains with lots of skin revealed. The Tanga Cara-Preta is fronted with a completely open triangle, edged with beads. No hiding anything here. And the Tanga Mata-Homem is another open triangle across which dangle seven finely wrought metal chains which do little to conceal the wearer, but much to intrigue the observer.

This is definitely not a company for the shy, but rather for the bold consumer who definitely wants to show off big time. But do so in an amusing and original way. And, of course, that customer does exist. When examining the extensive collection you will certainly see some silhouettes you have seen before; but you will most likely remark on how many that are new to the U.S. market...and your eyes.

In all, according to Eric Aguiar who has represented the company at several of the recent trade shows, there are 438 existing styles. New for 2012, “its going to be around 120 to 140” new pieces spread over three collections. Wholesale prices for the thongs average at about $6, for the body suits at about $13 and for sets at about $10.

In all, the company’s website displays over a dozen separate collections. According to Aguiar, however, more than half the “best sellers” are represented in the “Soy Loco Por Ti Sensuall" grouping, with wholesale prices ranging from $5.85 to $18.25. Eric Aguiar, eric@sensualle.com.br.