To receive more info from Forplay about a particular product, Click on the photo (photo will enlarge). 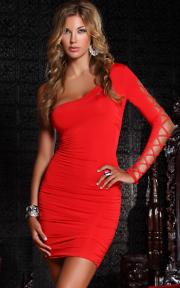 (Filed Under wholesale Lingerie News). Under the collection name Blvd., Forplay, long a prominent force in the club wear arena, has just launched a new 59-piece dress line featuring substantially lower prices. “It’s the same quality, same Forplay fit, and the same fabrics at half the price,” declared co-founder Lou Rahim. The increasing volume of the company’s dress business has allowed for the new pricing he said.

Rahim, who has been making dresses for 20 years, introduced the new collection at the recent International Lingerie Show in Las Vegas along with merchandiser Angelica Van. The new line wholesales for about half the price of other dresses from Forplay.

Blvd. dresses are sexy and revealing, “but not super see-through,” explained Van. The kind of dresses that a stylish woman would take with her for a weekend in Vegas, added Rahim. Most are low-cut, with several featuring a deep plunge almost to the waist, many with a jeweled clasp in the center of the cleavage. Others feature chains, rings, or a combination of rings and cutouts down the front. Some feature an asymmetrical design that bares a single shoulder, some feature revealing slits down the arms or up the legs, or large cut-outs at the hips or waist or back. Most reveal some part of the body without making the wearer feel completely naked. And then there are some where the top portion of the dress does not not cover much more than would a bathing suit.

Another way to look at it, with almost five dozen styles to choose from, any confident young woman will find a dress that highlights her one best asset. Or several of her assets if she wishes. The initial offerings are pictured, front and back, in a catalog distributed at the ILS.

Wholesale prices for most of the Blvd. dresses range from $12 to $16, and all come boxed or on hangers, most in sizes S,M or L. (A few with large rhinestone or hardwood details wholesale for up to $19). Colors include rust, aqua, red, pink, purple and black, along with dresses that combine two of these colors. There are also animal prints including snow leopard and cheetah. The fabric is made from ITY (interlock twist yarn) providing a soft feel inside and out, as well as a natural elasticity.

The initial targets are boutiques and chain stores, but BODY can see different parts of the line selling just about anywhere dresses are sold. The collection will be ready to ship by the end of September. Going forward, Rahim promises another 160 styles.

“People are excited. Customers are surprised at our price point and surprised that we have lowered them and kept the same quality,” said Rahim, speaking about the traffic at the booth during the International Lingerie Show.

Already some “best-sellers” have emerged including Captivate (with a deep plunge to the waist and gathering along the arms), Intermingle (asymmetrical with one shoulder bare, the other are covered with lacing that criss-crossing up from the wrist to shoulder), Jewel (strapless with a large rhinestone piece in the cleavage and an additional cut-out section on one side) and Tease (another strapless design with a tight waist).

Customers were always “asking for a lower price point. Now we are giving them the quality of Forplay, with the price that are asking for,” said Rahim. Greg Gubner is handling sales for the new Blvd. collection. Tel: (626) 277-4488.