To receive more info from Leg Avenue about a particular product, Click on the photo (photo will enlarge). 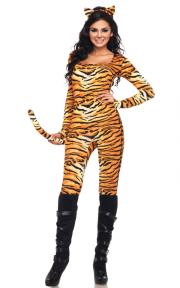 (Filed Under wholesale Costume News). As the 2012 Halloween selling season drew to a close and the 2013 was about to begin, we asked several of the leaders in the “sexy costume” industry to talk about where we have been and where we are going. We begin here with the comments of Manuel Da Campo, vice president of sales at Leg Avenue, a dominant wholesaler in this category.

NICK MONJO, BODY: What are the most unexpected TRENDS you have noticed in the costume business this year?

DA CAMPO: While it wasn’t unexpected, I think we were pleasantly surprised by the amount of consumers that took things into their own hands and created their own costumes using accessory pieces. The trend has been going toward adult consumers looking to individualize their look for what is their one time of year to really express their creativity. But as a wholesaler, the real testament is getting out there on Halloween night and seeing the amazing ways that partygoers put together their outfits! There were so many amazing costumes created from just dresses and bodysuits as a base and fun accessory pieces, much more than we expected.

NICK MONJO: What were the three or four dominant or “must have” costumes this year?

DA CAMPO: We are thrilled with the recent success of our Furry Monster costumes and accessories! The items took on a life of their own and we had so many fans send us images of how they styled their monster costumes and accessories and made them their own. We anticipate monster and other furry characters to be popular next year. Speaking of furry, animals were also a huge success this year. Last but certainly not least, SWAT and police costumes were very strong and continue to be classic costume for Halloween.

NICK MONJO: How will this change for NEXT Halloween, in 2013?

DA CAMPO: The trend is definitely moving toward female consumers looking to individualize their look with basic catsuits, corsets and petticoat dresses that serve as a base for accessories pieces. Being able to create your look is what makes Halloween fun and 2013 will see an increase in costume accessory sales.

NICK MONJO: A lot has been said of the fact that Halloween fell in the middle of the week this year [as well as in 2013]. Has this had a major impact on your business this year vs. other years?

DA CAMPO: There is definitely a slight shift in sales when Halloween falls on a weekday rather than weekend, but not as drastic as you might think. Adults will still wear costumes to work and there will still be parties that weekend prior to Halloween, so while the calendar might not be cooperating, there is no stopping the celebratory atmosphere.

NICK MONJO: A number of wholesalers have been cutting back in their Halloween offerings this year. If you are a wholesaler, has this been the case with your company? Explain.

DA CAMPO: Leg Avenue continues to offer a wide array of costumes and we’ve even increased our collection of licensed costumes and costume accessory line. Any cutting back would be based on streamlining character offerings or phasing out older trends. Rather than cutting the offerings for the sake of cutting, we continue to focus on creating new and exciting designs that will replace anything that has been cut from the line.

NICK MONJO: Costumes that light up in some way have been a trend in costumes. Discuss the impact of this on the market. How significant is this trend.

DA CAMPO: Halloween partygoers are always looking for a way to make their costume stand out and what better way than to have it light up! The extra impact of LED lights can make a standard bee or fairy costume really special. The cross over popularity of these costumes at raves makes them a great year round option to keep in stock.

NICK MONJO: Licensing has always been important for costumes. Is the impact of licensed product continuing as strong as ever?

DA CAMPO: With the ever increasing popularity of super hero movies and the iconic characters that continue to pop up on our TV’s, the licensed costume trend shows no sign of slowing down. Consumers identify with these licensed characters and love to dress as them for Halloween, whether as their childhood heroes or current day pop culture icons that are fun to embody for one night.

NICK MONJO: There seem to be more licenses available than ever. Some have reported success with “lesser known” licenses. Do these lesser-known licenses work with consumers in your opinion? Comment and explain your opinion.

DA CAMPO: Leg Avenue’s success with the “Top Gun” license is proof that some often over-looked properties have the most potential. The “Top Gun’” costume license had been passed over more than once, but we felt that there was an opportunity with nostalgic properties that were still relevant in pop culture. Our “Flash Dance!” License is another perfect example! With the success of these licenses, we’ve been able to take a broader look at more of these hidden gems and present the consumer with fun, new options for costumes.

DA CAMPO: The retailer trend is definitely to buy early and the consumers are increasingly buying late. Although, as retails sales can fluctuate and weather in October is always a factor, we’ve seen smaller retailers waiting to buy until mid year so they can gauge their inventory and finances at that time, which is smart.

NICK MONJO: Evaluate the impact of Halloween trade shows and “sneak peeks” on your Halloween buying.

DA CAMPO: As a wholesaler, the value of the Sneak Peek Shows and the early trade shows is immeasurable. These early shows provide direction for the rest of the year, not only for wholesalers, but for the retailers too. The opportunity to sit down with the retailers to discuss the prior Halloween while it’s still fresh in everyone’s mind, finding out what worked and what didn’t and getting feedback on your line is invaluable. As a manufacturer, it provides the opportunity to gauge your new inventory based on positive or negative reactions to the line and early orders. As a retailer, it provides the opportunity to view all the lines in a short period of time and give them an opportunity to see what they need to fill in the gaps in the lines they carry. I can’t imagine what we’d do without the opportunities these show provide.