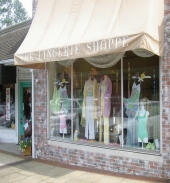 Twenty years ago, 62-year-old Lingerie Shoppe was bought by Brenda Meadows along with a friend. The two had not been involved with intimate apparel before and spent most of their time doing charity work, until they thought it might be a better idea to put their efforts into something that would be monetarily profitable. The kick is, not only was the idea a success financially, but it has also been emotionally contributive.

Meadows' partner retired 10 years ago and now she, along with 5 part-time employees, run the 1,600-square-foot selling space. "It's been a very pleasurable business," said Meadows. "It's a very intimate business, so you get to know your customers very well and I like that."

Meadows and her employees chat up their customers and build relationships with them. "[Chatting with the customer has] afforded us a lot of wonderful friends and we think that people consider us their friends too," she said.

The shop is located in a shopping village area of Birmingham, Alabama, she said. Due to the favorable location, Meadows often welcomes first-time walk-in customers, as well as the regulars, which pop in about once a month. "I would describe my clientele as upper middle class and young professional women," she said. "At the same time, I work really hard to make the Shoppe appealing to customers across a wide economic spectrum."

Some brands that are big sellers for Meadows are Chantelle, Josie by Natori, Carole Hochman, Spanx and Affinitas. She raved about Affinitas especially. "I have done very, very well with them," said Meadows. "The new products that I've added to the store are some of the nicest things and people are so pleasantly surprised in the price for the quality. I bought it to compete with Victoria's Secret." Affinitas bras cost approximately $25 retail at Lingerie Shoppe with panties retailing at a range of $14 to $16.

The store carries approximately 100 brands in total, which includes slippers, sleepwear, lingerie, bridal, loungewear, accessories and "just enough hosiery that saves people from going to the mall," she said.

For Meadows, sleepwear has been a very strong category and she has noticed a shift to comfortable, cotton and lightweight pajamas. Especially in a location like Birmingham, Meadows says many customers are looking for the same thing: lightweight fabrics. Calida, Carole Hochman, Natori, Josie by Natori and April Cornell are just some of her top-selling brands in the sleepwear category.

Soon it will be Mother's Day, which is her second biggest season for sales, with Christmas ranking as number one, and Meadows will be bringing in a large variety of Eberjey and P.J. Salvage products, she said. She will buy "soft, strappy and young-looking pajamas," but expects to sell "tons of cotton gowns, robes and bed jackets," as well.

Before the economic slump, Meadows would not be as cautious with her buying. "If I loved it, I bought it," she said. But now, she has been much more frugal she admits. She expects her vendors to show her quality products, particularly pajamas, that are nicely priced.

At the Shoppe customers may walk out with a beautiful bra, panty, robe or pajama, but one thing is for sure, a new friendship will be made.