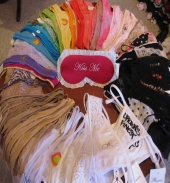 When Anina Young opened Brazen Lingerie in Upper Manhattan's Inwood neighborhood just over a year ago, she couldn't have known that a recession was about to hit. However, despite the past months' turmoil, sales in her cozy boutique (13-by-20-feet) are still going strong, since Young clearly fills an intimate apparel gap in the neighborhood.

"There were no lingerie shops when I opened up, and now I am the only one," Young said. "Additionally, I am the only one working here, so I don't have to worry about having to pay, or lay-off, employees."

Although she has never run a boutique before, Young does know a thing or two about intimate apparel through her experience running the online lingerie website Orange Boots. Since opening she has worked hard to fill the needs-all of the needs- of the eclectic neighborhood: dominated by a Dominican population, but with plenty of other demographics mixed in. Sizes run from 32A to 46I in bras, and S to 4X for everything else, at prices from $7 to $100. Young keeps her store stocked to the brim with lingerie, maternity, basic and sleepwear styles.

"I have a really great connection with my customers. How do I know? Because they just keep coming back," Young said. "I always tell women who have a terrible time finding their size,'Oh yeah. I've got something that fits you,' and then they are so happy when it does that they buy five or six of the same bra."

Young has noticed that aspect unique to her clientele is their attraction to bright colors and snappy designs like the neon pink, lavender and yellow prominent in Timpa and Honeydew merchandise, some of her best sellers. According to Young, "black, white and beige are just boring to the community I serve. It's really gotta pop around here."

Other popular brands include Jezebel, Le Mystere, Panache, Mary Green, Carol Malony, the Little Bra company, Montelle, Body Wrap and Blush's corsets. In maternity, her best seller is Melinda G., and she also carries Belabumbum and La Leche League. Recently, she dropped Cosabella, and has additionally had to drop other brands, including Elle Macpherson, because the vendors do not allow her to order a few items at a time, which "just doesn't make sense for the size of my store." She recently added OnGossamer and Yummie Tummie, and is considering the addition of Ed Hardy.

To attract new clientele and keep regulars coming back for more, Young promotes Brazen Lingerie through Internet hotspots including facebook, myspace, citysearch and yelp. She has also been advertising in a local paper since last fall, coming out with new slogans each week. She also frequently runs half-priced panty and bra sales.

This holiday season, she threw a holiday party for her customers featuring a "hot santas" clad in nothing but tight black pants and a santa hat.

"I made it very clear that the santa would not strip, but he was basically their as eye candy." Soon after, she threw a Valentine's Day party. And it's not just about partying it up either: starting this January Young began collaborating with a local lactation consultant to start a monthly breast-feeding support group.

Good service is the cornerstone of Young's store, which she attributes to her investment in her customers and to the success of the store.

"I am extremely invested in my store and am really nice to my customers. I never push people to spend more than they feel comfortable spending," she said. "Once I know a woman's size, I bring her everything that I have in that size. The fact of the matter is, you are not going to get the level of service at a department store as you will at Brazen."

Good service may just be the best recession-proofing technique out there.