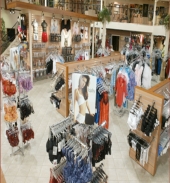 Lingerie occupies approximately half of the space in each location, with the other half dedicated to other products such as toys, accessories, books, lotions and more.

"We guarantee the largest variety and impeccable customer service," said Mireille Gaudreault, manager of the Montreal location who oversees all the buying. "But, on top of carrying regular lingerie, we have sexy lingerie and clothing that is hard to find."

Some of the brands the Boutique carries include Aubade, Lejaby and Dreamgirl, which Gaudreault believes will be top-selling brands for the upcoming Mother's Day holiday. In fact, Gaudreault stated Dreamgirl, a line they buy from distributor Jolar-Speck, to be the most popular brand in the industry. The store has done business with Jolar-Speck for 15 years, most recently purchasing Dreamgirl's Red Diamond collection.

The retailer's clientele varies between the ages of 25 to 45. "It's mostly women that shop for themselves in the lingerie section," said Gaudreault. "We also get a lot of couples [and] we do get men that are shopping for women for special occasions like Christmas or Valentine's Day, although they mostly go to the video section," she said.

The typical customer will spend an average of $40 for underwear, and approximately $100 on bras. Regulars tend to shop the store for lingerie approximately once a month. Small and large are the sizes that sell the most, said Gaudreault.

So far, Boutique has not been affected by the depressed economy, said Gaudreault. "We will keep doing things normally," she said. "We won't reduce our publicity and we'll keep on giving an impeccable customer service."

There is a bra fitting specialist on staff, which, she reported "is an important part of our sales because a lot of women are misinformed about their bra size."

To have your company considered for the BODY BEST RETAILER award, and to have your store or retail web site profiled here, and to be linked to the BODY web site, Fill Online Form or download the form here. Once you fill out the form, email to ted@fmmg.com
Contact Information: (718)676-4444
Copyright © 2020 Fashion Market Magazine Group, Inc. All rights reserved.
All photos Copyright © 2000-2020 Nick Monjo & Fashion Market Magazine Group. All rights reserved.
Please email any website related issues to bodymagazinefmmg@gmail.com