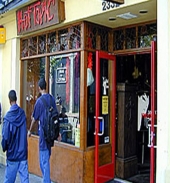 Hot Topic, Inc., a mall-based specialty retailer operating the Hot Topic and Torrid concepts offers a complete selection of music/pop culture-influenced apparel, accessories and gift items for young men and women.
Designed for various lifestyles for females between the ages of 15 and 29, Hot Topic first opened its doors in Westminster, California in the fall of 1989 and has been plugging forward ever since.

While sales in the Westminster location didn't go as expected, the fashion-forward company took a few steps back to re-evaluate the situation and then moved to Montclair, California, and opened the first Hot Topic store to carry all music-influenced accessories for teens.

While Hot Topic caters to a number of youth-oriented "scenes," such as metal, Indie, punk, emo, goth, club, otaku and lounge, the retailer has a softer side and offers cute intimates for women principally between the ages of 12 to 22.

In the denim sector, the company has a strong focus on skinny jeans, as it boasts an array of colors including gray, brown, leopard, black and white checkered, and blue. Plaid skirts and woven button shirts have also managed to hit the shelves as the Harry Potter Gryffindor tie top and ivory flannel sleeveless top add variety to the collection. Black-and-white checked, skull, hot pants, pinstriped star bras and hello kitty cami sets are a few of the lingerie styles available this fall.
As the years went by, Hot Topic customers were drawn to the underground cartoon, cult movie and comic book scenes. Hot Topic eventually brought the world of South Park, Care Bears, Superman, SpongeBob SquarePants and lots of other pop icons into their stores.

By 1995, Hot Topic had 29 stores open in the Western U.S., and one Midwest store in the Mall of America in Minneapolis, Minnesota. Taking the East Coast by storm, Hot Topic opened store #31 in Staten Island, NY.
In 1996, with about 60 stores, Hot Topic became a publicly traded company on the NASDAQ under the symbol HOTT. The cash from the public offering allowed the company to open more stores across the U.S. Currently there are more than 600 Hot Topic stores in all 50 states and Puerto Rico.

Most recently, Hot Topic has closed licensing deals with Disney, Barbie, Simpsons, Transformers and Family Guy to distribute shirts, hoodies, accessories, key chains and toys for teens and young adults. And just in time for Valentine's Day, Hot Topic is even offering fitted t-shirts that declare: "Hello Kitty Loves Me", "Programmed For Love" and "I Love You" with "Love" crossed out and "Hope Something Eats" scribbled below.

Hello Kitty intimates still remains strong with best sellers in the tank and short set category. Also in the mix is Hot Topic's own label Morbid Threads that offers an array of lingerie including fishnet tights.
Hot Topic is more than just a hip music store, the large retailer aims to support programs and organizations that specifically focus on encouraging and educating youth in music, creative writing, painting, photography, filmmaking and more. And with that, Hot Topic opened the Hot Topic Foundation to support children around the U.S.

To have your company considered for the BODY BEST RETAILER award, and to have your store or retail web site profiled here, and to be linked to the BODY web site, Fill Online Form or download the form here. Once you fill out the form, email to ted@fmmg.com
Contact Information: (718)676-4444
Copyright © 2020 Fashion Market Magazine Group, Inc. All rights reserved.
All photos Copyright © 2000-2020 Nick Monjo & Fashion Market Magazine Group. All rights reserved.
Please email any website related issues to bodymagazinefmmg@gmail.com