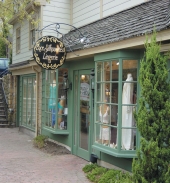 Karen Thompson founded her first Lace Silhouettes Lingerie store in 1988 in Lahaska, PA. Since then, she has expanded her empire to include a total of ten stores: six lingerie and four clothing stores, ranging from 700 to 2,500-square-feet in size. In her lingerie stores, Thompson employs between 28 and 49 persons during peak seasons.

In a recent interview, Thompson, who shops at the tradeshows in New York and Las Vegas, reported that the most requested sleepwear brands in her store are Karen Neuburger, Crabtree and Evelyn and Eileen West. In Foundations, the most requested are Wacoal, Le Mystere and Chantelle, respectively. Thompson analyzes manufactures annually to decide "if a poor performing manufacturer should be replaced by new."

In discussing popular items specifically, she said "the most requested items range from the very traditional mainstream fun pajamas such as Karen Neuburger with matching slipper socks to more contemporary styles such as Donna Nadeau. With our foundations, a properly fitted bra that is good for everyday wear, such as Oprah's Favorite, Le Mystere or Wacoal, to the popular Spanx collection that is great with work attire or even casual clothing." The store features complimentary bra fittings that she reports "many of our guests request every day."

Thompson feels that her customers are varied, "We market to a variety of women mainly because several of our stores are located in tourist towns which cater to a wide variety of ages and socio-economic profiles. While the ultimate end-users of our products are women, we recognize the importance of men as purchasers of gifts and they are an important segment of our future growth."

Thompson, who refers to the shoppers in her stores as guests, said that customers are beginning to favor European styling in lingerie, "‘Our guests’ requests are leaning towards the European trends which are becoming more acceptable to American women with lots of fashion, lace and pretty silhouettes." She goes out of her way to make her customers feel comfortable, having gone so far as to have made "dinner reservations and called hotels for overnight vacationers,"
Thompson is hoping to take her connection with customers to another level by launching her own brand, Wishes for Women by Karen Thompson, which she describes as "a true ‘inspirational’ pajama company which gives back to women in need 365 days a year."

Lace Silhouettes has moved its headquarters to a new, larger hub in Lahaska, Pa. Its new address is 310 Carousel Lane, PO Box 427, Lahaska, Pa., 18931.

Also, the company is moving forward with "Wishes for Women," a non-profit foundation "where we grant wishes to women 365 days a year," owner Karen Thompson said. First up is designing a line of pajamas with "wish pockets" and securing manufacturers, volunteers and funding. "It's a terrific charity and we hope to make this a national organization," Thompson said.