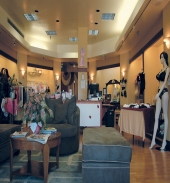 Neiman Marcus rose from humble beginnings. Founded on "bad business judgment," according to then company CEO Stanley Marcus, in 1957, Neiman Marcus surged and became one of the premier departments stores in the U.S., carrying a wide range of women's intimate apparel.

It all began with three people, a dream and $25,000. The first store opened its doors in 1907 then six years later, burned to the ground. The dream could have ended there, but the trio's resiliency led them to open a temporary store a mere 17 days after the fire. By the next year, Neiman Marcus reopened its permanent location in Dallas, Texas, where it still has its headquarters. The company is also the only company still in existence that currently operates under the same name under which it was begun.

The ritzy retailer, who at times has been criticized for its exorbitant prices, carries intimate apparel from a wide range of manufacturers including: La Perla, Scanty, Vera Wang, Juicy, Oscar de la Renta, Donna Karen, Chantelle, Cosabella, and many more. Women can find a pair of panties that run as low as $20, as well as high-end bras that will set them back a cool $148. But despite the company's sometimes-lofty price tags, vendors report good sales through Neiman Marcus, as well as increasing popularity in some categories.

"We've been selling some of the same styles for years, and every year they seem to sell more and more fantastically," said Fernando Sanchez brand manager, Laura Ciccarello, about the company's line of chemises. "Neiman's has a great understanding of its customers."

Women's apparel made up for about 35 percent of the Neiman Marcus' sales in 2006, almost doubling the output of its nearest competition, coming in the form of the Home Furnishings and décor department.