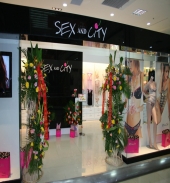 On October 1, 2007 Relex Canada, a Canadian-based trading company, opened the first freestanding lingerie store in a mall in China. Sex and City, the first of what will soon be a chain, is located in Jinan, China. On opening day the store's sleek display racks featured luxurious lingerie and shelves of pampering body products.

"The idea was to put sex toys in the store but it is too early for the Chinese market," said company president Max Wei. "That's why we stayed with the sexy lingerie and added natural body care products, essential oils, variety of candles."

Sandra Chen, director of Relex Canada noted that it was this semi-conservative nature of the Chinese (in contrast to the Western perspective of sexy lingerie) that drew them to lingerie manufacturer René Rofé Lingerie.

"We attended the International Lingerie Show in Vegas last April and René Rofé really stood out," she said. "It is sexy, but not too sexy and the Sophie B line is very sophisticated."

Currently, 85 percent of the overall store sales and 100 percent of the intimate apparel sales are attributed to René Rofé Lingerie. Walls in the thousand-square-foot store are lined with feminine and floral babydolls and bold bustier and bra sets. In the middle of the shop sits a display of assorted panties in bright pinks, blues and basic tones, a concept Chen claims is new to Chinese retail.

"Other brands sell lingerie in sets," she said. "This is a new concept that has been well accepted by our customers."

"René Rofé has an amazing line of panties," she added. "They have thousands of styles and each one is different. There are sexy, cotton, lace and embellished styles - we like the bling bling."

While working with a U.S. based company has brought a fresh Western perspective to the Chinese lingerie market, there have been a few setbacks for the store. Chen explained that Western sizes are measured larger than the Chinese, typically, René Rofé's sizes run one size larger than Asian sizes. With the average shopper looking for a size small, Chen has found that some customers find the lingerie too big. Sex and City has also found frustration with shipping since much of Rofés product is imported to the U.S. from Hong Kong before it makes the trip back to Sex and City for retail.

"We are open to shipping the product straight from the factory, but right now our order is too small," said Wei.

Already, Wei and his team at Relex Canada have plans to expand Sex and City to a large chain with plans to open one hundred stores in the next five years.

"Our next step is to open stores in major cities, capitals and sub-cities," he said. "Our strategy to start in cities will help lower the cost and bring the brand to a more fashion conscious customer."

Chen added, "Our goal is to become the Victoria's Secret of China-with the idea of bringing beauty and lingerie together."