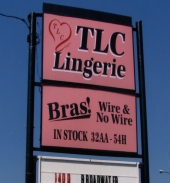 Every woman needs a little tender loving care when it comes to bra shopping, and that is exactly what partners Victoria Bartle and Linda and Charlie Levy had in mind when they opened TLC Lingerie in Billings, Mt., back in 1997.

Thanks to Bartle's background in intimate apparel and a history at Warnaco, the store was given a start-up inventory and moved into a small house on Broadwater Avenue. According to Levy, the store came together under a shoestring budget, but quickly began to turn profits by attracting consumers from as far as North and South Dakota with the promise of bra sizes 32AA to 50H from a variety of manufacturers, and all in stock.

"We solve problems for people. Most people don't think about all the problems women have and what to do to solve these problems," said Levy.

With an extensive inventory of bras from manufacturers such as Goddess, Elomi, Le Mystere, Felina and Enell, the retailer is able to offer a well fitting bra to every customer it serves. But some solutions come with a little use of the imagination, said Levy, who once found the perfect pullover sleep style for an elderly woman in the Bravado! nursing bra collection.

"In some cases there isn't anything that will solve a woman's problem, but we will figure out what works. That's what we do."

TLC Lingerie also strives to be an outpost for post-mastectomy women looking for mastectomy bras and prostheses. The staff has been trained on how to fit prostheses and aims to serve the area as one of the leading post-mastectomy apparel retailers.

"Our stock of seven styles of prostheses and bras in all sizes makes the fitting after a mastectomy a positive experience," said Levy. "There's really nothing as satisfying as seeing the sparkle return to a woman's eyes when she looks in the mirror and sees that, from that moment on, no one will know she's had surgery unless she tells them."

The trio could not be more pleased with the success they have found as intimate apparel retailers and look to continue helping women find a perfectly fitted bras well into the future.

"This has not turned out to be the sleepy little retirement business we thought we were going to have," said Levy. "We don't seem to be able to stop promoting what we do because the women of Montana need our service and we feel compelled to let them know we're here."